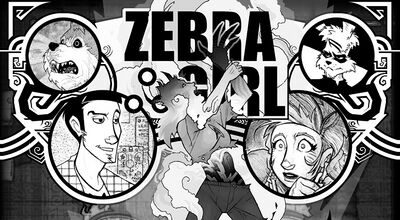 Zebra Girl, a Webcomic by Joe England that began in 2000, tells the story of three roommates (Sandra, Jack, and Crystal) whose lives are irrevocably transformed when they discover an ancient magical tome in their attic. When the book is slammed shut after an accidental demon-summoning, Sandra finds herself transformed into the eponymous Zebra Girl, a demon with black-and-white striped skin, hooves for feet, long, wicked talons, acidic bodily fluids, and the ability to set things on fire with her mind. Jack, blaming himself for the incident, devotes himself to the study of magic in hopes of finding a way to cure Sandra of her transformation, and along the way becomes a powerful archmage and the only hope of restoring magic to the world at large. (Or possibly staving off a magical apocalypse; Sandra isn't the only demon running around..) And Crystal... well, is Crystal.

It started out as a rather dark gag-a-day strip, but gets afflicted with Cerebus Syndrome in record time, as Sandra and the others discover that being transformed into/living with a demon is most emphatically not all fun and games. By all accounts, this has only made it better, as the storyline takes various twists and turns and the world gradually warps around the protagonist trio, thrusting them into the middle of a veritable supernatural maelstrom that they attract simply by existing in their current states.

Tropes used in Zebra Girl include:

Tawny, immediately after Sam meets Sanda and Crystal: "God... Next you're going to tell me you've met humans!"
Sam: "No."
Tawny: "What?"
Sam: "I'm not going to do that. The joke where you hypothesize some really unlikely scenario and get more and more specific, not knowing you're exactly describing actual events, while I stand here all awkward from your inexplicable outburst of irony."