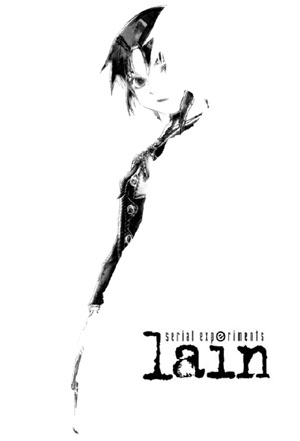 An erudite, confusing and chilling anime from the late 1990s, Serial Experiments Lain is creepy cool Seinen Cyberpunk, as well as a notable Mind Screw in the genre. Shonen has Neon Genesis Evangelion, Shojo has Revolutionary Girl Utena, and seinen has Lain. The show takes an information-rich dive deep into the nature of reality and truth, and in the process leads the viewer to come to his or her own conclusions about the meaning of the show, the meaning of reality, and even what actually happens in both.

The setting for Lain is a place that appears to be contemporary Japan -- albeit with a few telling differences. The story begins with apparently-normal schoolgirl Chisa Yomoda throwing herself off a building without warning. Several days after her suicide, Chisa's friends receive emails purporting to be from Chisa herself. The emails claim that she has not died, but simply abandoned her body for an existence within "The Wired", a pervasive computer network very much like the Internet as first envisioned by William Gibson (with some touches of The Matrix).

This is the point where Chisa's classmate Lain Iwakura -- a shy, reclusive teenage girl who looks younger than her actual age -- enters the story. With nary a social skill and no knowledge of computers, Lain keeps a resolutely reclusive attitude and barely interacts with her not-really-friends, her best friend Alice/Arisu, her cold parents, or her indifferent sister Mika -- until she receives something that will change everything in the whole world: one of the emails from Chisa.

Everyone thinks the Chisa emails are a cruel prank, but Lain is curious about the meaning of the message in the email. After Lain's tech-obsessed father happily supplies her with a top-of-the-line "navi" (personal computer), she begins searching The Wired to find out more. What Lain discovers undermines her family, her sense of self, and perhaps even the fundamental fabric of reality -- and she is soon forced to deal with a power she is unprepared to control.

Serial Experiments Lain is a unique creation. Its visual style is unlike any other animated work, Western or Eastern, and constantly evolves through the course of the series, serving as a metaphoric device in and of itself. Much of the plot development is orthogonal to the viewer -- sometimes seen but often simply implied -- which requires the viewer to think about and draw his/her own conclusions about what's happening. A fair amount of information is obscured or distorted, but this simply reflects what is happening within the series itself; the story challenges the viewer to impose his or her own interpretation on even the most self-evident aspects of the show.

Lain's creators are also quite well-read, as they draw upon dozens (if not hundreds) of real-world sources for what seem to be the most outré concepts in the story:

...then you will enjoy digging through the densely packed web of information that is the conceptual foundation for Serial Experiments Lain. (While it's not necessary to do so to enjoy the show, it greatly enhances the overall experience if a viewer does the legwork.) To understand some of the references and sources better -- or add some examples -- visit the Trivia page.

Lain was originally conceived as a full-on multimedia project, although the other two parts are not nearly as widely known as the Anime. The second part of the project is a short Manga story included with an art book -- The Nightmare of Fabrication -- which touches on similar themes (albeit without all the heavy references) and serves as an awkward sort of "bridge" between the anime and the third part of the project by including characters exclusive to each. The third part is a game for the PlayStation, although calling it a "game" may be a bit of a stretch -- instead of actual gameplay, it acts more as an interface to access parts of Lain's story (which runs in a different direction to the one presented in the anime), presenting a multimedia experience that includes video, diary excerpts, and notes from Lain's therapist.

Retrieved from "https://allthetropes.org/w/index.php?title=Serial_Experiments_Lain&oldid=1962774"
Categories:
Cookies help us deliver our services. By using our services, you agree to our use of cookies.