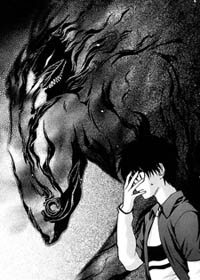 All in your head?

A specific form of Split Personality. Maybe the Body Horror became a bit too fused with someone. Maybe the Unstoppable Rage is getting...too unstoppable. Perhaps The Atoner's past is taking a life of its own. A half-human's Demon/Vampire self is trying to take control, or that Deal with the Devil is hitting a bit too close to home.

Either way, the enemy is behind the hero's eyes, and its time is coming when it can take over. Until then, it'll do all it can to control him and get him to give in to its Horror Hunger. The thing to stress most is that the Enemy Within is the hero. He or she cannot simply exorcise it out. Often the Enemy Within is the cause of the powers that the hero has that allows them to do what they do. With Great Power Comes Great Insanity, remember?

Often, since Evil Is Cool and Evil Feels Good, other characters may realize the danger before the hero and need to convince him.

Contrast Enemy Without. Compare Jekyll and Hyde. See also Battle in the Center of the Mind. Usually part of their Soul Anatomy.

Examples of Enemy Within include:

Retrieved from "https://allthetropes.org/w/index.php?title=Enemy_Within&oldid=1836149"
Categories:
Cookies help us deliver our services. By using our services, you agree to our use of cookies.