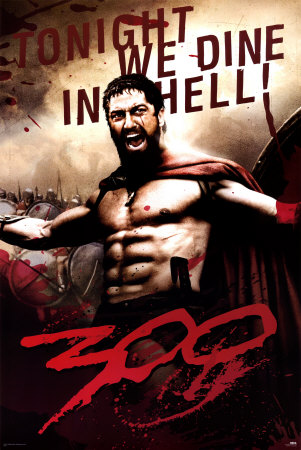 300 is the Zack Snyder film based on the Frank Miller Graphic Novel that he wrote after seeing The 300 Spartans, which is based on the Battle of Thermopylae as described by Herodotus as occurring in 480 BC. This film is at the extreme end of Adaptation Distillation.

A young, one-eyed Spartan soldier relates to a group of soldiers how recent events came to pass. King Leonidas of Sparta refuses to bow to the God King Xerxes' demands for Sparta to submit to the Persian Empire. A visit to the deformed, elderly Ephors and their Oracular Urchin/Sex Slave brings worse news: Sparta cannot wage war against the armies of Persia on the eve of the sacred Carneia festival.

After much deliberation, Leonidas himself defies the oracles' prophecies; gathering three hundred of Sparta's finest soldiers and calling them his "personal bodyguard", Leonidas plans to walk to the Hot Gates (Thermopylae), a narrow pass between the ocean and mountains. By rebuilding an ancient wall to bottleneck the vast Persian army, the superior fighting ability of the Spartans would conceivably make up for the small size of their army. Seven hundred or so other Greeks turn up as Leonidas and the 300 make their way to the Hot Gates, and a hideously deformed Spartan man called Ephialtes also joins the convoy to ask Leonidas for a place on the battlefield; in exchange, Ephialtes will give the king information about an unguarded path that would leave the Spartans wide open to retaliation from behind. Leonidas refuses to accept Ephialtes into the fighting ranks -- it would leave a weak point in their defense -- and returns his attention to preparing for the battle.

When the Persian Army brings its forces down on the Hot Gates, the Spartans' plan works perfectly, and a lot of one-sided ass-kicking ensues.

In the meantime, the bizarrely-named (yet incredibly hot) Queen Gorgo tries to persuade the Spartan politicians to support Leonidas, but Theron -- scarily played by Dominic West -- is the most stubborn of the lot.

The battle goes exactly according to Leonidas' plan; the skill and perfect defensive position of the Spartans proves to be too much even for the monstrous Persian army. The kill count is obscenely lopsided, and the only real problem occurs when Ephialtes sells his information to Xerxes for women, wealth and a (horrible) uniform.

300 is very stylized, as it's presented as a morale-boosting story by Dilios, a Spartan orator, on the eve of the Battle of Platea in 479 BC. Word of God states that Dilios doesn't let the facts get in the way of his story; he intentionally leaves out a lot of extra detail, exaggerates pretty much everything, recounts dialogue of scenes that he didn't witness and would be unknown to him, and paints everything in pretty broad strokes. (As an example: the legions of the Persians are monstrously inhuman, whereas the Spartans are all white, muscular men.)

If you want some historical background: while the movie is stylized, it is still accurate (in very Broad Strokes) as to what happened. Many of the lines are taken verbatim from the accounts of Herodotus and other ancient historians (though their objectivity has been questioned by historians and scholars). Xerxes had the nickname of "The Avenger" due to the Persians losing a prior war against the Greeks under King Darius. There was also a second prong of the invasion that arrived by sea and was dealt with by Athens' navy and the other Greek city-states.

Zack Snyder is reportedly working on a "sequel" to 300 which would show the war from the Athenian point of view, and Frank Miller is working on a prequel about Xerxes.

These! Are! TROPES!:
Retrieved from "https://allthetropes.org/w/index.php?title=300&oldid=1913247"
Categories:
Cookies help us deliver our services. By using our services, you agree to our use of cookies.