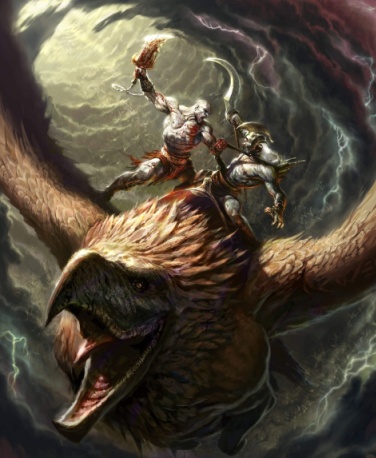 Kratos: Proof that you don't need a shirt to be awesome.

God of War is a popular video game series for the PlayStation line by Sony based in ancient Greece, but an ancient Greece where all those bizarre things you read about in Classical Mythology textbooks exist. One Spartan soldier, Kratos, has a personal relationship with the Gods that can best be described as complicated. A brutal, tormented man, Kratos begins the series as the sword of Olympus, fighting the enemies of the gods while trying to escape the horrors of his past.

God of War received ample praise in a number of forums: IGN named it the Greatest Game of All Time for the PlayStation 2, Electronic Gaming Monthly ordained it to be the best PS2 game of 2005 (and the second-best overall game of the same year), and Gamespot called it the best PS2 game of 2005. The pattern, if you haven't picked up on it, is that the game was very well-liked.

It featured a simple, intuitive combat interface that made fighting remarkably easy. Kratos's default weapons are the Blades of Chaos, which are swords on the ends of very long chains and are functional as both melee weapons and Whip Swords, or perhaps Sword Chucks. While each game gives you other weapons, many players found themselves content with these Awesome Yet Practical weapons, which allows Kratos to string together breath-taking and almost balletic combinations. (Some have complained about how this reduces the game to a button masher; others love it.) Two face buttons allow the player to switch between Weak and Strong attacks; the third enables jumping, and the fourth throws and Finishing Moves involving Action Commands. Many enemies and all boss battles have these finishers, turning the latter into highly cinematic Puzzle Bosses. Finally, besides dodging and rolling, Kratos gets access to magic spells. These typically include: a ranged attack; an area-of-effect attack; a ray that causes enemies to freeze somehow; and a swarm-of-souls attack that damages everything in sight.

It was also something of a "slash" game, and that's not just in reference to the bloody combat. Primarily in the action/adventure genre, God of War included platforming and puzzle aspects as well. These usually involved Kratos swinging over bottomless chasms, pushing blocks into position, and so forth.

There have been eight games in the series, with a ninth announced.

Prior to the remake/sequel in 2018, the games don't change much from the original (which, considering the first game sold Eleventy-Zillion copies and won approximately the same number of awards, is unsurprising); the combat interface is almost completely unchanged, and while Kratos loses his magical powers at the beginning of the second game, the Magic granted to him throughout the game closely resembles the powers he earned in the first.

Tropes used in God of War (series) include:

If you've got this far without Kratos killing you accidentally or deliberately, congratulations. You'll die in the sequel to this page. :(

Retrieved from "https://allthetropes.org/w/index.php?title=God_of_War_(series)&oldid=1969524"
Categories:
Cookies help us deliver our services. By using our services, you agree to our use of cookies.