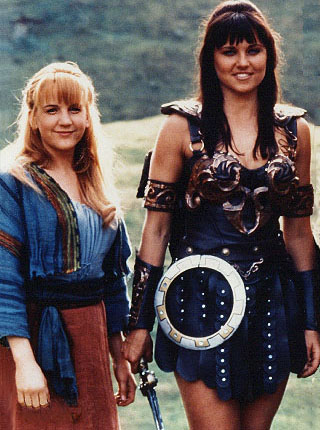 Xena and her li'l buddy Gabrielle

Xena: Warrior Princess starred Lucy Lawless as an amazonian leather-clad warrior-woman fighting monsters while battling inner demons based on sins from her warlord past. Xena originated on Hercules: The Legendary Journeys as a Worthy Opponent to the title character, and became so popular with fans that she got her own show.

Immediately after her split from Hercules, she gained a friend and traveling companion in Gabrielle. Gabrielle was an aspiring bard who wanted to chronicle Xena's adventures. They became Heterosexual Life Partners who were the greatest source of Les Yay the 90s could offer. Word of God goes back and forth on how "official" their relationship was, with conflicting sources.

Xena had many things in common with Hercules, even sharing certain plot lines between the two series. The one main difference was that while Hercules was a bit hesitant to kill, Xena had no such qualms and would regularly kill enemies. The show was equal parts satire, dark drama and lowbrow comedy, often in completely nonsensical combinations. Anachronism Stew was par for the course.

The series ran from 1995-2001, and at one point was the most popular show in the world, surpassing Baywatch for the title.

The series also had several comic book spin-offs by Topps Comics and Dark Horse Comics (including two crossovers with Evil Dead), which ended following the show's end. However, in 2007, Dynamite Entertainment acquired the rights to the comics and published two story arcs (Contest of Pantheons and Dark Xena), which essentially act as an Alternate Continuity and a Fix Fic, ignoring many of Season Five's plot developments and discarding the series finale entirely.

Has a characters page.

Semi-averted in that during classical period throughout much of the Mediterranean world, Greek was the common tongue. So much so that one variant, Koine, is the Greek word for common. Of course once Xena and Gabrielle travel to Asia all bets are off.

Retrieved from "https://allthetropes.org/w/index.php?title=Xena:_Warrior_Princess&oldid=1952072"
Categories:
Cookies help us deliver our services. By using our services, you agree to our use of cookies.