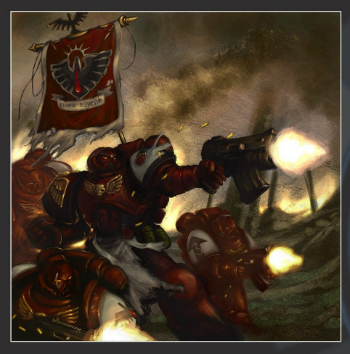 I fear nothing, for I am fear incarnate!

This is where the Badass Crew is taken to the next logical step and turned into an entire army. The Badass Army is made of 100% badasses and there is absolutely nothing that can stop them short of overwhelming numbers or an even better Badass Army. There is not a single soldier who can not hold his own in a fight. They are extremely likely to be all, or mostly, super soldiers and have a high likelihood to have been raised in The Spartan Way. They will not use Hollywood Tactics like amateurs.

Count on them to boast many a Colonel Badass. Almost always commanded by one or several Four Star Badasses.

Often squared off against the Redshirt Army to demonstrate exactly how hard they rock.

The polar opposite of Redshirt Army. A sub-trope of this, where an especially Badass Army is sealed in the can, is the Sealed Army in a Can. Proud Warrior Race Guy is another variant where a guy is from a culture that makes an unusually big deal about trying to be this. Usually an Elite Army. Compare Humans Are Warriors, where having a Badass Army is humanity's hat, and with Men of Sherwood, a Badass Army on a smaller scale.

Semper Fi is similar, but they are not an army, regardless of the infantry, tanks, artillery, and attack helicopters that they use. And don't call them that.

No real life examples, please; there's way too many of them to count.

Examples of Badass Army include:

Retrieved from "https://allthetropes.org/w/index.php?title=Badass_Army&oldid=1652706"
Categories:
Cookies help us deliver our services. By using our services, you agree to our use of cookies.