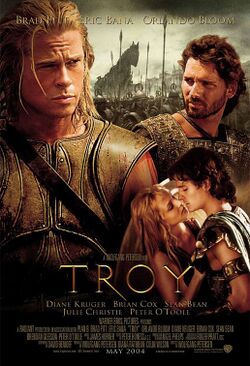 The 2004 movie version of the legend of the Trojan War, starring Brad Pitt and Eric Bana as Achilles and Hector, respectively, and Orlando Bloom as Paris.

The film is not technically an adaptation of Homer's Iliad, despite common misconceptions, as it takes material from other sources as well: the movie covers the entire story of the Trojan War, from the abduction of Helen to the Trojan Horse and the Sack of Troy, whereas the Iliad deals only with a single episode of the war, the wrath of Achilles and the deaths of Patroclus and Hector. While the Iliad covered only a few weeks of the war, in the process of adapting ten years of war to the screen, the film deviates from the plot of the Trojan Cycle in terms of who dies when in the Ensemble Cast, and focuses more on Hector (who many see as the Hero Antagonist of the story).

Other differences include the downplay of supernatural elements, and Achilles is made into a more honorable (and sometimes womanizing) character instead of a brooding Jerkass. While it doesn't try to claim it is "The True Story" of the Trojan War, it is portrayed in a fairly realistic fashion as such that it may very well have happened in a similar way. Achilles is Shrouded in Myth as being demi-god but it is later clarified to not be the case, he is merely an exceptionally powerful human.

Tropes used in Troy include:

Plague! Don't get too close, my lord.
King Priam: What happened here?
Priest: They desecrated the temple of the gods, and Apollo desecrated their flesh.
Glaucus: They thought they could sack this city in a day. Now look at them... fleeing across the Aegean.

Messenger Boy: They say your mother was an immortal goddess. They say you can't be killed.
Achilles: I wouldn't be bothering with the shield then, would I?

*Your own joke about pearl necklaces: inserted here*

Achilles: The Gods you speak of -- I've met them. I'll tell you a secret: The Gods envy us. They envy us because we're mortal -- because any moment might be our last. Everything is more beautiful because we're doomed. You will never be lovelier than you are now -- and we shall never be here again.

Soldiers of Troy! To LEAD you men has been my Honah!
The boatman waits for us! Let's make him wait... a little Longah!

Boy: The Thessalonian you're fighting... he's the biggest man I've ever seen. *I* wouldn't want to fight him....
Achilles: And that is why no one will remember your name.
Boy: (looks teary-eyed at the camera for the last time as Achilles rides off)