Everything About Fiction You Never Wanted to Know.
Jump to navigation Jump to search
/wiki/Andrew Hussiecreator 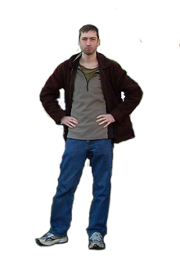 Andrew Hussie is a Web Comic artist best known for MS Paint Adventures, who rose to particular fame with his latest project Homestuck. He's only been doing MSPA for the past four years, though - for several years before then, he tried his hand at a fairly diverse array of webcomic endeavors and wrote a small number of graphic novels (only one was actually published). Other old endeavors of his include ironic reviews of muscular horse pornography (no longer available), and Jandrew Edits, a series of humourous edits of Star Trek: The Next Generation in collaboration with Jan Van Den Hemel.

It's abundantly clear that Hussie is a man who knows his tropes really, really well. Practically everything he does (but especially MSPA) plays with, subverts, double-subverts, deconstructs, exaggerates, hangs lampshades, and otherwise works the hell out of the conventions of multiple genres at the same time. Also, if This Very Wiki is anything to go by, he's very, very quotable.

Pages headlined with a HussQuote™:

Retrieved from "https://allthetropes.org/w/index.php?title=Andrew_Hussie&oldid=1630798"
Categories:
Cookies help us deliver our services. By using our services, you agree to our use of cookies.