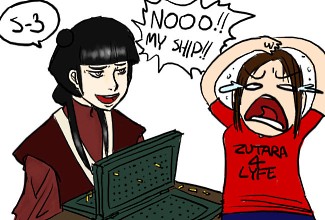 All's fair in love and Battleship

Though many producers and writers are aware of Shipping in their respective fandoms, that doesn't necessarily mean they like it. It may be because of the actions of the fans if they get too rowdy about it, or maybe they just don't like the pairing involved, or maybe they just want to put an argument to rest. But whatever the case, rather than teasing the ship, they load torpedoes and send it to Davy Jones' Locker.

Ship Sinking is a scene that, whether deliberate or not, seems to kill any reasonable chance of a relationship occurring between two characters. It can be a betrayal, a sudden familial connection (not like that will stop anyone), hooking up with someone else, having the respective love interest kick the bucket, or maybe they just bring them out of the closet (or rarely, put them in). If well done, this can actually cause the fans to Abandon Ship, but don't always count on that; some ships refuse to sink.

At its most pronounced, this essentially results in a Humiliation Conga for shippers. In any case, it's probably going to take a Retcon to get those two together. Sorry fangirls (and boys!).

Compare No Hugging, No Kissing. A variation on Jossing. Another variation, the Anchored Ship, occurs when factors arise that preclude the characters getting into a relationship, but have the potential to be resolved (although the problems are not always resolved, and even if they are, other factors can still sink the ship). See also Death of the Hypotenuse, where the author takes it one step further by killing off one of the characters instead of making them a Romantic Runner-Up.

Examples of Ship Sinking include:

Retrieved from "https://allthetropes.org/w/index.php?title=Ship_Sinking&oldid=1944348"
Categories:
Cookies help us deliver our services. By using our services, you agree to our use of cookies.