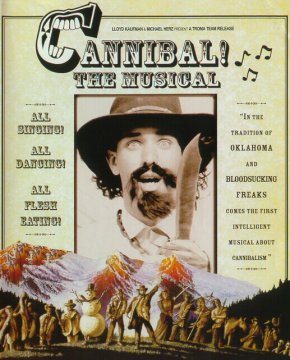 Cannibal! The Musical (also known as Alferd Packer: The Musical) is a Black Comedy musical, aptly named and done by the boys behind South Park in their usual good taste. The story is all about legendary Colorado cannibal Alferd Packer, played by Trey Parker himself, backed by his crew of Humphrey, played by Stone, and other strange characters in his crew. Very strange Hilarity Ensues.

The movie was made on a shoestring budget and it shows-- Parker and Stone caved from pressure from friends to actually make a fake trailer they made for an assignment in college into a real movie. The film itself was made in 1993 but released as a film in 1996 by Troma. Early South Park humor is evident. A lot of it parodies the musical Oklahoma!.

The full movie can be watched for free online at the official site here, as well as the version with the DVD Commentary track. All the songs are downloadable for free as well.

Tropes used in Cannibal! The Musical include:
Retrieved from "https://allthetropes.org/w/index.php?title=Cannibal!_The_Musical&oldid=1505059"
Categories:
Cookies help us deliver our services. By using our services, you agree to our use of cookies.