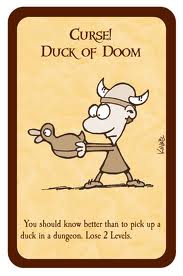 There's something primal about saying "Doom". The deeper, more echoey, the better.

People also often forget that "doom" (related to "deem," i.e., "judge" or "estimate") comes from the idea in Old English and Norse mythology of an ultimate destiny, which need not necessarily be a bad one—you could re-translate the phrase "He met his doom" as "He met his fate". File that one away, fact fans! Another possible re-translation would be "He met his (ultimate) judgment.", as the Modern English word "doom" is derived from the Old English word "dōm" (pronounced like "dome"), meaning "judgment" or "law".

This trope is subverted and parodied easily and often, to the point that it has become an Undead Horse Trope.

Caution and clear diction must be applied when verbally calling this trope, lest Unfortunate Implications ensue.

Tropers are especially susceptible to this.

Trope names that have themselves met their doom:

These other tropes are examples of this trope:

Examples of Doomy Dooms of Doom include:

Retrieved from "https://allthetropes.org/w/index.php?title=Doomy_Dooms_of_Doom&oldid=1966806"
Categories:
Cookies help us deliver our services. By using our services, you agree to our use of cookies.