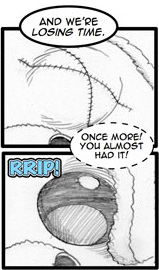 What can be scarier than a respawning giant teddybear?

Finally, after deadly fighting and clever tactics, the Serial Killer, monster, alien, or what-have-you is down for the count. The hero turns to leave... and the monster's eye opens.

Typically used as part of a The End - or Is It? ending, but just as often used whenever a hero dismisses a "corpse" as inanimate and either walks off or gets too close. A favorite is to have the hero deliberately get within striking distance to retrieve a weapon or item near or lodged in the creature... only to have their eyes open and arms come up and grab them. Also frequently happens with hands twitching, especially after the coroner's already pulled the sheet over the supposed corpse's head; that goes clear back to Frankenstein making this Older Than Radio.

An interesting minor variation involves beings in People Jars or who are frozen moving just once they're out of the hero's field of vision. Combines nicely with Glowing Eyes of Doom and Eye Lights Out. Compare to Finger-Twitching Revival. See also Pivotal Wakeup, and The Eyes Have It for when the eyes belong to something which is not actually alive.

Examples of Eye Awaken include: