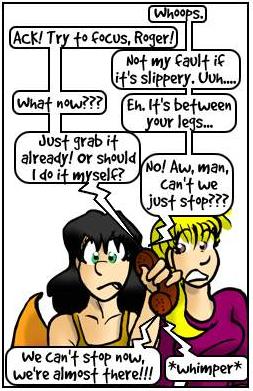 Bad time to drop the phone in mayonnaise.

A deliberate ploy to make the viewer think something sexy or illicit is occurring when it actually is not. A scene will begin with its characters not visible to the camera, or partially obscured; the dialogue between them seems lascivious and explicit, and may be laced with double entendres. But when the camera finally reveals the whole scene, the action involved is entirely innocent and the dialogue turns out to be referring, entirely or mostly, to these innocent actions—it is only in the dirty minds of the viewers that anything untoward happened.

Sometimes this is hard to bring off believably. In many cases, if you listen carefully to the supposedly innocent phrases, they don't sound natural, don't fit the conversation, and are totally unlike the way the characters usually speak. In fact, it was tailor-made to lead to a misunderstanding, and makes a lot more sense in that context than in the supposed true meaning. But the situation is often so distracting it's hard to notice at first.

This is also often pulled off on other characters in-story. Sometimes, the viewers will see the explanation of the scene first, and then we cut to an angle from which an ugly subtext can be (mis)construed by outside observers.

Usually perpetrated immediately upon return from a commercial, for comedic effect.

This is related to Comedy of Errors, and the polar opposite of both Getting Crap Past the Radar and Accidental Innuendo. See also Not So Dire (where the subject is danger, not sex), Does This Remind You of Anything? and That Came Out Wrong. Sometimes prompts someone to say "Is That What They're Calling It Now?" Compare Accidental Pun, where a non-sexual remark is misinterpreted as, well, a pun; and Orgasmic Combat, when fighting sounds like...something else.

Examples of Innocent Innuendo include:

From there, it gets more and more suggestive until Thatch and Wolf decide to look over the wall to see what's going on, and Kiki gets pissed off and uses water magic on them, draining the bath.

Retrieved from "https://allthetropes.org/w/index.php?title=Innocent_Innuendo&oldid=1873849"
Categories:
Cookies help us deliver our services. By using our services, you agree to our use of cookies.