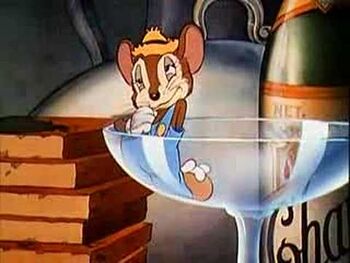 A quiet character, from a rural location, commonly Arcadia, often found as a Fish Out of Water in the Big City. Frequently depicted as having an inherent superiority in morality, ethics or common sense compared to the people around her. Often used as an authorial voice to deliver An Aesop, or simply to provide a contrast to the "sophisticated" people with whom she lives or works.

On the first arrival at the city, may be dazzled by the luxury of city life. Welcome to the Big City or discovering the shallowness of the Life of the Party will soon cure her; in a single story, she will wisely head back to the countryside, or tragically die, trapped by disease, pregnancy, or despair, but in a continuing one, she will mature into the level-headed version.

The female Country Mouse often becomes the target of the Rich Bitch.

Compare with City Mouse and The City vs. the Country when this is an actual plot.

This term and City Mouse derive from Aesop's Fables, making it Older Than Feudalism.

Examples of Country Mouse include:

Retrieved from "https://allthetropes.org/w/index.php?title=Country_Mouse&oldid=1843423"
Categories:
Cookies help us deliver our services. By using our services, you agree to our use of cookies.