Everything About Fiction You Never Wanted to Know.
Jump to navigation Jump to search
/wiki/Deep Purplecreator 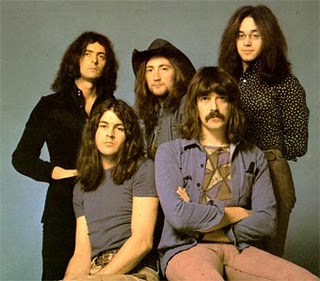 "Nobody gonna take my car, gonna race it to the ground


Nobody gonna beat my car, gonna break the speed of sound"
—"Highway Star"

Deep Purple is a long-running Hard Rock band founded in 1968. They are one of the widely considered "Big Three" of early Heavy Metal (along with Black Sabbath and Led Zeppelin). Their style is primarily Blues Rock and Hard Rock, with occasional ventures into other rock subgenres including some prog efforts.

The group is also known for their constantly rotating line-up; the group has its roots in a proposed rock band called Roundabout, so named because musicians would get "on and off" the group as they pleased. This didn't quite work out, and while the group that eventually became Deep Purple is notable for its endless membership changes, each succesive group has been more or less a cohesive unit.

A list of the various line-ups, or "marks", can be found here.

Band Discography, with which lineup recorded each[6]:

"We all came down to Montreux, but that's another song"