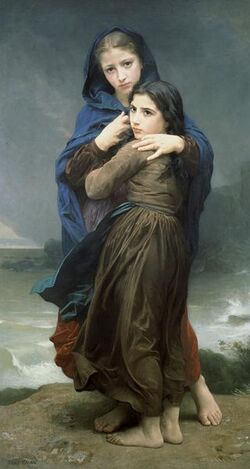 The Storm, 1874 painting by William-Adolphe Bouguereau.

Something about the weather lends itself well to Ominous Foreshadowing. Whenever trouble looms in the near future, any suitably perceptive character can play narrative weatherman and give a plot forecast—which, unlike a normal weather forecast, is 100-percent guaranteed to be true. If a storm isn't coming, then perhaps a cold wind is about to blow, or winter is setting in... all that matters is that the characters and audience are well-informed that The Plot is on its way.

Weather Dissonance may reinforce that.

Often contains Dramatic Thunder far off in the distance, or directly overhead. Can lead into Battle in the Rain, It Was a Dark and Stormy Night, or Lightning Reveal, or any combination.

Invoked metaphorically for all kinds of trouble.

Contrast Gray Rain of Depression, which generally indicates muteness and lack of activity—and generally does not come with thunder or wind. Not to be confused with Grave Clouds.

Related to My Significance Sense Is Tingling and Empathic Environment, except that the ominous portent occurs before any disastrous event. Differs from Spider Sense in that it isn't a warning of immediate danger. Not quite Tempting Fate, but you'd be forgiven for making that mistake. See also Ominous Fog.

Almost always a Portent of Doom.

Contrast Thunder Equals Downpour, where there is no build-up.

When the ominous signs are less meteorological and even more non-specific, see Vagueness Is Coming.

When the storm is the threat that is coming, see Hostile Weather.

Examples of A Storm Is Coming include:

The narrator of Moonrise Kingdom tells us to the minute when the storm is going to come.

Boy was there. In spades.

Retrieved from "https://allthetropes.org/w/index.php?title=A_Storm_Is_Coming&oldid=1893617"
Categories:
Cookies help us deliver our services. By using our services, you agree to our use of cookies.