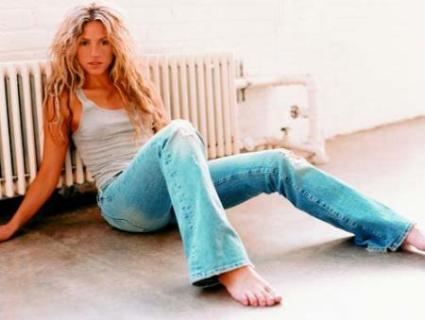 Shakira and her "trademark" Pies Descalzos[1]

For some reason, this character tries to avoid wearing shoes whenever possible. May be because the character has some kind of mystical connection with the ground she walks on/ Wild Child status. This can also be a sign of heroism and badassery, like a milder form of Full-Frontal Assault; the Nature Hero and Barbarian Hero are most prone to it. Bridging Wild Child and Nature Hero, the Noble Savage and Jungle Princess are virtually always barefoot.

This is also sometimes a sign of youthful innocence, and many of the characters who demonstrate this trope are either children or childlike. It can also be a sign of eccentricity or absentmindedness; Bunny Ears Lawyers and Cloudcuckoolanders may go barefoot in public because they are either flouting societal conventions or are simply oblivious to them. Some do it because they're poor, though the trait may be kept even after reaching a better station. Some people do it because they find shoes uncomfortable, some people because they feel it gives them a greater awareness of or a connection to their surroundings, while some people do simply because it's something interesting or fun to do as part of their personal image, or any combination of the above.

Quite definitely Truth in Television. In Real Life, many go barefoot because they simply find it more comfortable than wearing shoes. This is backed up by an increasing amount of research, particularly on running, that not wearing shoes can dramatically reduce injury rates, while both barefooting and the use of minimalist shoes are steadily growing in various types of running. And, intuitively, if your feet smell or feel less pained upon taking off your shoes, you have to figure your body was in need of a little barefoot time.

It may be easier for some in a rural area, as urban sidewalks and roads are quite abrasive to bare feet. And that's not limited to humans: horseshoes exist for the same reason. It also varies by region; some countries are more barefoot-friendly than others (Australia, for instance). In some parts of the world, it's even common for children to attend school barefoot, and not just in poverty-stricken countries where shoes are rare.

Finally, sometimes it's just because a character's feet are unusually large or a funny shape.

Compare Foot Focus (when a TV show or movie shows frequent close-up shots of bare feet, usually as Fetish Fuel or for Author Appeal... or both, if you're Quentin Tarantino).

Contrast All Women Love Shoes and Barefoot Poverty. Furries have a tendency to be unshod, leading to a society of Barefoot Cartoon Animals, unless they're The One Who Wears Shoes.

Retrieved from "https://allthetropes.org/w/index.php?title=Does_Not_Like_Shoes&oldid=1945494"
Categories:
Cookies help us deliver our services. By using our services, you agree to our use of cookies.