Everything About Fiction You Never Wanted to Know.
(Redirected from Don't Be a Menace)
Jump to navigation Jump to search 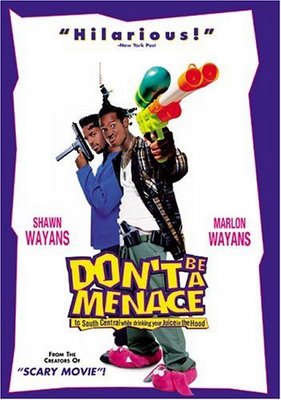 Don't Be A Menace To South Central While Drinking Your Juice In The Hood, or Don't Be a Menace for short, is a 1996 Wayans Brothers parody of "growing up in the hood" movies, particularly, as the name suggests, Menace II Society, South Central, Juice, and Boyz N the Hood. Taking every trope those movies were known for and turning them upside down, this movie is considered one of the funniest movies the Wayans ever made.

Ashtray (Shawn Wayans) is left by his mother to live with his estranged father in the hood, with the intentionally weak explanation that he needs to learn how to be a man. While hanging out with his crazy cousin Loc Dog and their friends, he quickly gets caught up in violence and crime. He also falls in love with Dashiki, a promiscuous woman with 7 kids, which draws the attention of her Ambiguously Gay ex-con boyfriend, Toothpick.

Tropes used in Don't Be a Menace to South Central While Drinking Your Juice in the Hood include:

Dashiki: Oh, so you're man enough to come up in me, but you ain't man enough to take care of what comes out, get my nails done, pay my rent, and get me a new car? You know what? You ain't nothing but a little boy.
Ashtray: Ain't all about the size of the boat! It's the motion in the ocean.
Dashiki: ...That's not what I'm talking about.

Dashiki: ...What are you doing?!
Ashtray: Trying to win Best Actor at the Soul Train Awards.

Preach: I'm just trying to do to white women what the white MAN has been doing to us for 400 years!
Crazy Legs: Yeah? What's that?
Preach: Fuck 'em!

It's also exaggerated. The first girl that Preach decides to pursue specifically because she's white is downright ugly, while ignoring the attractive black woman in front of her.