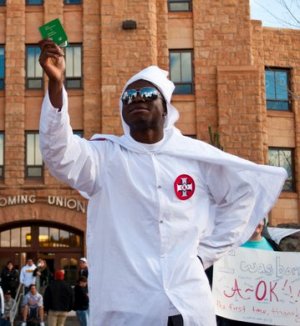 "Leo Felton had the right idea!"

The Boomerang Bigot is a character who thinks that all members of Group X are an inferior race/species... even while being a member of Group X themselves. Despite the obvious contradiction, the Boomerang Bigot doesn't see anything wrong with their view, and will continue to proudly persecute Group X.

Differs from You Are What You Hate in that there is no secrecy or self-doubt involved. The Boomerang Bigot knows they're a member of the targeted group—and others know it, too—but remains unabashed about holding their views, possibly in an odd form of Honor Before Reason.

Such behavior almost always occurs for laughs. If not... be afraid.

Has also been known in the mainstream as "Self-Hating", with the ethnic group following after (such as "Self-Hating Black" and "Self-Hating Jew"). A more politically correct term is "internalized bigotry". If they're not self-hating and simply criticize the behavior of their group, they might just be insisting that they Stop Being Stereotypical.

If done poorly, this trope can lead to Unfortunate Implications, such as that being bigoted is okay as long as it's self-loathing bigotry or that a person must be prejudiced in the "right" way - otherwise they'll be a Category Traitor.

Examples of Boomerang Bigot include:

Retrieved from "https://allthetropes.org/w/index.php?title=Boomerang_Bigot&oldid=1958608"
Categories:
Cookies help us deliver our services. By using our services, you agree to our use of cookies.