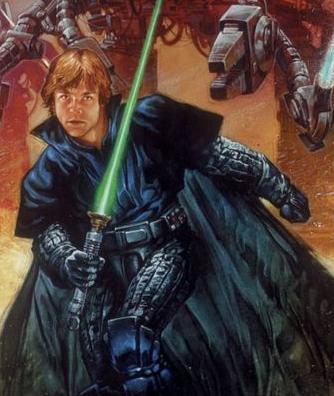 He's got too much of his father in him.

Genealogy and Ancestry are really popular tropes in fiction. It makes a great Secret Legacy, a source of fraternal conflict, adds drama with an unexpected family reunion, and can set up a host of different conflicts and relationships. Just like in real life, a person's ancestry can determine their genes and, to a lesser extent, their personality and even their talents; but in fiction this extends to skills, superpowers, and even moral alignment.

Sometimes even The Messiah and the most valiant Knight in Shining Armor are at risk of going insane, or over to The Dark Side, if a parent or grandparent was a Villain by Default or member of an Evil Race. This inevitably leads said character into a Wangsty existential crisis that comes completely out of left field, since they rarely ever struggled against villainous impulses before this revelation.

The reverse is not always true though. A Card-Carrying Villain with a good family is rarely compelled towards good—though it does inform a possible Heel Face Turn later on thanks to The Power of Love from their family.

The hero's fear in this situation is that their "evil genes" will inevitably doom them to become as evil as their ancestors Because Destiny Says So, it's written In the Blood—despite the fact that up to the point before The Reveal they had a solid reputation, moral compass, and personality, capable of using Heroic Willpower to resist just about any evil supernatural coercion. It seems heroes are as insecure about their ancestry as their reputation.

The inevitable conclusion to all this navel gazing is either the character going "Screw Destiny!" or a friend slapping some sense into them; if he has been raised in ignorance so that he would not Turn Out Like His Father, it is quite likely to actually work. On the other hand, this can end up being a Self-Fulfilling Prophecy, in that the angst leads to fear, then hate, then evil, as the character either does a full Face Heel Turn or becomes Necessarily Evil. For a comparison, the Reluctant Monster bypasses this nonsense entirely and is simply "themselves," albeit with a healthy heaping of introspection.

Now, get an Evilutionary Biologist who thinks the same thing, and they'll try and splice together a clone Super Soldier of the hero using such donors as Hitler, Stalin, Pol Pot, and Scrappy Doo, under the logic that their creation will be "the most powerful and evil creature alive! Bwahahahaha!" Which, of course, should only produce a clone with a penchant for mustaches and Scooby snacks, but invariably is pretty evil.

A pretty common twist for heroes with Muggle Foster Parents is that they are the child of the Big Bad who has been spirited away and raised like an Ordinary High School Student in the hopes that Nurture can beat out their inherently evil Nature. Amazingly, sometimes it's because Evil Parents Want Good Kids. In extreme cases, this "Nature" can manifest as an Enemy Within or a Super-Powered Evil Side. Again, this twist can lead to a Shower of Angst. For some reason, the parent they get the bad blood from is usually the dad. Another twist is the son of a mighty warrior becoming a mighty warrior themselves, even if they were orphaned as a baby.

Sub-trope of Not So Different. See Freudian Excuse for when the Nurture position applies. Compare Lamarck Was Right for children inheriting non-moral traits that shouldn't even be genetic. A big issue for anyone with a Mad Scientist Truly Single Parent. Creates numerous problems if the blood it is in is Royal Blood. The more light-hearted version is It Runs in The Family. Compare Raised by Orcs, where someone raised by evil people/races turns out good due to not actually being related to them and Heroic Lineage from their true parents. Compare Loser Son of Loser Dad, where everyone else thinks this will be the case. Contrast Sibling Yin-Yang, when the same blood give very different results.

Examples of In the Blood include:

Retrieved from "https://allthetropes.org/w/index.php?title=In_the_Blood&oldid=1964843"
Categories:
Cookies help us deliver our services. By using our services, you agree to our use of cookies.