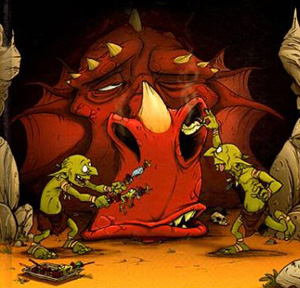 See that guy over there? The one that can make Your Head Asplode with his Psychic Powers? What a weirdo. Let's throw rocks at him!

This is the fate-tempting and suicidal tendency of characters to bully, persecute, or in some other way provoke people or things they really shouldn't be messing with. That weird loner who sits in a corner reading? Fine. That sweet girl who can heal people? If you're that much of an asshole, go for it. The blind kid that somehow knows what you're about to do and is powerless to stop you? Yeah, jackass, whatever floats your boat. But the kid who can warp the fabric of reality and just wants to be left alone? Bad idea.

While Bullying a Dragon need not require actual bullying (or actual dragons), it is a reasonably popular method - as long as the provoker or provokers intentionally and excessively antagonize someone much more powerful than they are, knowing full well beforehand just what they are screwing with, then it counts. Also just because a person can beat up or kill a person doesn't mean they have the right to. (As You Know, blowing someone's head off for an minor insult is kind of a dick move.) The Fettered especially have it bad, because they choose not to fight back, and often protect their tormentors from the Forces of Evil.

A Sub-Trope of All of the Other Reindeer, where the character is surrounded by tormentors even though they are known to have some incredible power conducive to being a Person of Mass Destruction, and most of the time because of this. This frequently crops up in Kids Are Cruel (in which case it would be "Kids Are Cruel And Also Freaking Idiots"). It's usually a way of getting us to sympathize with the main character, but, really, bullies should be smart enough not to mock the "freak" Blessed with Suck and Super Strength. Even when logically—or at least using the basest level of human decency and smallest inkling of self preservation—these bullies should find a weaker target or cut the poor kid some slack. So, in a sense, Strawman Bullies. Then, again Youth Is Wasted on the Dumb and the prideful.

If the victim snaps, they will turn the tables (if not turn the table into a buzzsaw, set it spinning at hurricane-level speeds, and shove their tormenters' necks into the blades). Also, don't lie - it can be fun when the bullies are killed off or else get theirs. (And, if they have not done anything remotely objectionable up to this point, this could well be taken as a case of Dark Is Not Evil.) Unfortunately, many of the times a bully attempts to go after someone of this ilk is because they are trying to elicit a response, which in turn, would prove everyone's point about how much of a freak they truly are.

See also Do Not Taunt Cthulhu. Compare Mugging the Monster, which is at least usually done by accident. If the would-be bullies are not aware of their victim's capability to arbitrarily destroy them, put the example in there. Contrasts with Underestimating Badassery. Did You Just Flip Off Cthulhu? is a related concept, which may or may not involve this trope.

See also Fantastic Racism. This is a popular backstory for a Start of Darkness. This trope doesn't usually have anything to do with The Dragon, who is a Big Bad's second-in-command. Video Game examples where the AI keeps trying to bully you despite the power difference because it's literally not capable of backing down have a special trope called Suicidal Overconfidence.

Examples of Bullying a Dragon include:

Retrieved from "https://allthetropes.org/w/index.php?title=Bullying_a_Dragon&oldid=1915842"
Categories:
Cookies help us deliver our services. By using our services, you agree to our use of cookies.