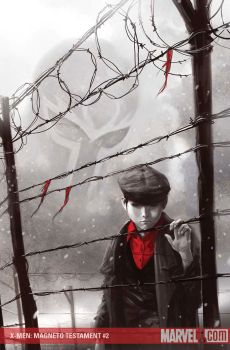 A boy and his future self

Nobody is born evil (well, except maybe the Enfant Terrible). Something usually happened to push a villain down the path to villainy. And hey, mightn't that make an interesting story?

Thus, we have the Start of Darkness, a Prequel Dark and Troubled Past where we find out how the main antagonist from the original story got to that point.

This, naturally, is especially common with Fallen Heroes, who usually get a Downer Ending where they lose faith in themselves and/or humanity. This will be especially poignant if they Used to Be a Sweet Kid (see also: Freudian Excuse).

Keep in mind that the reasons aren't always good ones, if there is such a thing as a good reason for turning evil.

Much of the plot is often a Foregone Conclusion, often ending in The Bad Guy Wins or Pyrrhic Villainy; many characters are Doomed by Canon, which may require a full Kill'Em All to explain why they don't show up in the original work. May include a Bloodbath Villain Origin to signal the first emergence of the character's villianous side.

Badly executed, this can be a part of a Badass Decay.

Please note that this is about prequels and flashbacks that show a major villain's reasons for turning evil. If this is the subject of the main plot, you're watching a Protagonist Journey to Villain.

Needless to say, this being a Prequel trope: Spoilers Ahead!

Examples of Start of Darkness include:

Retrieved from "https://allthetropes.org/w/index.php?title=Start_of_Darkness&oldid=1943700"
Categories:
Cookies help us deliver our services. By using our services, you agree to our use of cookies.