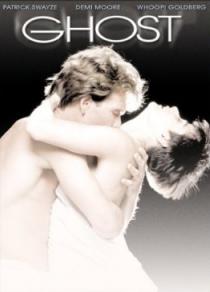 Ghost is a 1990 movie starring Patrick Swayze, Demi Moore, and Whoopi Goldberg in the performance that won her a Best Supporting Actress Oscar (which she attributes to Swayze insisting on her being cast in the part).

Executive Sam Wheat and his artist girlfriend Molly are a pair of yuppies living in SoHo New York. They're in love, though Sam seems to have a little difficulty coming right out and saying it, and can only manage "ditto" when Molly tells him she loves him.

On their way home one night, Sam is mugged and killed. Here the real story begins, as the violent murder plus the fact that Sam had the unfinished business of never truly telling Molly he loves her causes him to stick around as a ghost. Then Sam discovers there's more to his death than just making him an unfortunate statistic in mugger-prone New York.

If you've ever thought to yourself, "Great movie, but you know what Ghost was missing? Musical numbers!," you're in luck. Ghost hit Broadway in 2012, and then toured for another two years after. It received mixed critical reviews, but was nominated for a number of awards (of which it won a few). However, as of early 2015, the musical is closed and no longer touring, and anyone who missed it the first time around will have to wait for a revival.

Not to be confused with the 1997 short film Ghosts, starring Michael Jackson. Nor the Guilty Pleasure book Ghost by John Ringo.

Tropes used in Ghost (film) include:
Retrieved from "https://allthetropes.org/w/index.php?title=Ghost_(film)&oldid=1901040"
Categories:
Cookies help us deliver our services. By using our services, you agree to our use of cookies.