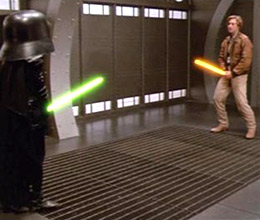 "I see your Schwartz is as big as mine."

Tea: Wow, look at all the phallic imagery!
(montage of monsters growing horns, getting existing horns enlarged, and a knight with a long hard cold lance)
Joey: What're you talkin' about, Tea? There ain't anything remotely suggestive about this duel!

Visual counterpart to Innocent Innuendo. Someone does something that is innocent on the surface, but can have very dirty connotations.

It generally has several common forms:

Once again, Freud Was Right.

No real life examples, please; the fact that apophenia exists means anything can be a Visual Innuendo to somebody.

Examples of Visual Innuendo include:

But right then, Kei sees that a wanted criminal who she has a grudge against is boarding the train, and runs off in pursuit.

Jack: Whose boons? Your boons?

Simon: It's not my fault. I'm innocent. Everyone else, out there, are the dirty-minded ones. I can only attest to being an innocent person.