Know When to Fold'Em 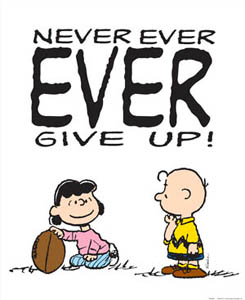 Some people need more convincing than others.


Know when to run
—Kenny Rogers, "The Gambler"

An Aesop having to do with how You Can't Fight Fate. Knowing when to just let go is a useful skill. Good luck trying to tell that to the Determinator. The Fatalist on the other hand is quite aware of this wisdom.

The Trope Namer is the Kenny Rogers song "The Gambler," which uses poker as a metaphor for life.

The Determinator, if presented as a flaw, will rarely if ever know when to back down, even when it would be beneficial. Compare You Were Trying Too Hard, which is about situations where folding somehow causes you to win the pot.

See also Screw This, I'm Outta Here, Villain Exit Stage Left, Opt Out, I Surrender, Suckers, Graceful Loser, I Will Fight No More Forever, Run or Die. List as #36 (and probably the first made) of The Thirty-Six Stratagems.

Examples of Know When to Fold'Em include:

JOSHUA: A strange game. The only winning move is not to play.

Thrawn: "You were expecting, perhaps, that I'd order an all-out attack? That I would seek to cover our defeat in a frenzy of false and futile heroics?"
Pellaeon: "Of course not."
Thrawn: "We haven't been defeated, Captain. Merely slowed down a bit."

Garak: "There comes a time when the odds are against you and the only reasonable course of action is to quit! That's why I managed to stay alive, while most of my colleagues are dead! Because I know when to walk away."

Tressa (daughter of said queen): I failed as a warrior and as a daughter. My friends were fighting to protect the queen. And I froze with fear!
Layla: Well, fear is a part of courage.

Again, 4K removes this (Layla's line now becomes "No one blames you"), and actually plays up the "Tressa is a coward, and it hurts her more since she's the queen's daughter" angle. Thankfully (maybe), this summary calls this version of the story out on it.