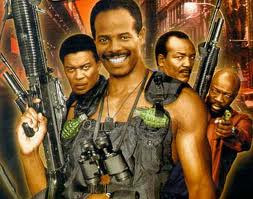 It's tough being a black hero.

Keenan Ivory Wayans' The Naked Gun-style Blaxploitation parody film stars himself as Jack Spade who, when he returns home, finds that his brother Junebug was killed off by a case of OG (Over Gold), which happens to involve wearing too many gold chains. Jack then seeks revenge for his brother's death by declaring war on Mr. Big (John Vernon), the one responsible for causing the massive gold chain boom in the neighborhood. He requests the help of his childhood idol, John Slade (Bernie Casey), and later enlists an army consisting of Hammer (Isaac Hayes), Slammer (Jim Brown), Flyguy (Antonio Fargas) and Kung Fu Joe (Steve James). Together, they seek to rid the neighborhood of both the gold chains and Mr. Big. Plenty of Lampshade Hangings and No Fourth Wall moments, as well as several folks involved with the Blaxploitation phenomenon.

These tropes are gonna get you, sucka!
Retrieved from "https://allthetropes.org/w/index.php?title=I%27m_Gonna_Git_You_Sucka&oldid=1746478"
Categories: