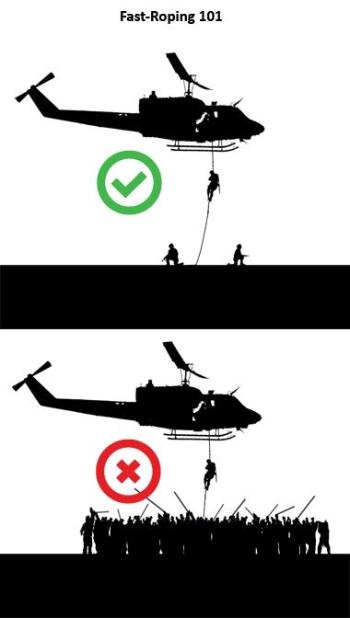 So you have The Squad, commandos from the Badass Army, or just some Elite Mooks. What's a great way to have them join the action in a dramatic or Badass manner? Why, have them rappel down into the scene from above! Shattering windows or skylights on the way is optional (though it may seem obligatory) and adds great effect.

Named after the real military tactic of fast-roping, making this Truth in Television. Although, it can be a case of Awesome but Impractical considering that the fast-roper is exposed to enemy fire the moment he draws attention. Fast-roping is normally used to insert soldiers in places helicopters cannot land, as opposed to making a grand entrance in front of a machine gun nest. Note that there is a difference between fast-roping and rappelling.

A type of Dynamic Entry that invokes Death From Above. It's the faster-paced, tactical-level Sister Trope of It's Raining Men. Related to Super Window Jump, which does not require a rope and does require a window or skylight.

Tends to be a case of Big Damn Heroes. See also "Mission Impossible" Cable Drop when it's done in stealth, not action. Grappling Hook Pistol is the (literal) inversion of this trope, when you use the rope to go up rather than down. Compare Building Swing.

Examples of Fast Roping include:

Retrieved from "https://allthetropes.org/w/index.php?title=Fast_Roping&oldid=1841400"
Categories:
Cookies help us deliver our services. By using our services, you agree to our use of cookies.