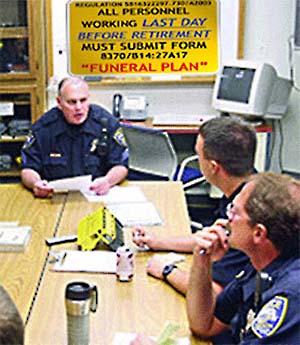 Retirony is a portmanteau of retirement and Irony, though how much of the latter it has is up for debate. Retirony is a way to make the audience feel sorry for a character's death without having to actually give him more than ten minutes of screen time. Anybody in a dangerous job who's only a few days away from retirement or flying one last mission before going home to marry their childhood sweetheart is absolutely doomed to death by Retirony, whether that takes the form of a cold-blooded criminal, an ace German fighter pilot or a great big robotic monster.

Just alluding to the existence of a character's family or showing a photo of them is enough for the audience to get the idea: the guy has a life outside of being a Red Shirt.

In the rare case that an exception is made, it is usually because the character is "going home to" a child, especially one his wife gave birth to after he shipped out—perhaps Infant Immortality has a proxy effect? If enough of this happens, they essentially get "promoted" up to Mauve Shirt, or leave for good, alive.

Retirony is rarely played straight anymore, since it has become such a well known and joked about trope.

See also Tempting Fate, Fatal Family Photo, If We Get Through This, Nothing Can Stop Us Now and Nothing Can Save Us Now.

Related to Yank the Dog's Chain. Contrast Crusading Widower, where the one to die is the cop's family.

Retrieved from "https://allthetropes.org/w/index.php?title=Retirony&oldid=1949101"
Categories:
Cookies help us deliver our services. By using our services, you agree to our use of cookies.