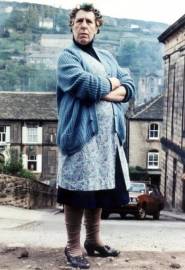 The Matriarch of this trope

Not all Matriarchs are Malicious, and not all Mama Bears are young. These grand dames are the grandmothers, aunts, and headmistresses who care for their children, students, or even employees with an iron discipline the army would envy. The Apron Matron has a larger than life, imposing presence and leads with a personality more forceful than a wrecking ball.

If there's combat to be had, she can take on a brigade on her own, even chasing out ninjas armed with naught but a broom. (Sadly, she'll often be captured and bound).

Expect her to be motherly, caring, strict, and kind. Also, probably "plump" yet strong. If married, she's likely to have a Henpecked Husband, though she's usually single either from outliving her husband or never marrying.

Can overlap with Mama Bear, and must be written carefully to avoid Flanderization into My Beloved Smother. Compare The Patriarch, whom she may be married to. See also the Mammy.

If an Apron Matron has enough prestige, she will likely become a Grande Dame.

Examples of Apron Matron include:

Retrieved from "https://allthetropes.org/w/index.php?title=Apron_Matron&oldid=1504884"
Categories:
Cookies help us deliver our services. By using our services, you agree to our use of cookies.