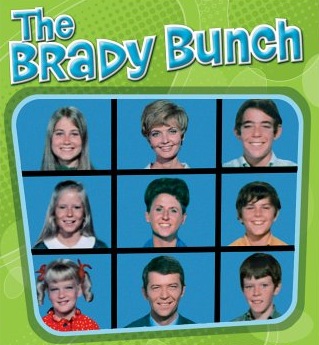 A 1969-1974 Dom Com about an unattached woman named Carol with three daughters marrying widower Mike Brady with three sons, and the almost total lack of conflict which results. The blended family includes the star-studded athlete Greg, the popular and beautiful Marcia, the slightly clumsy Peter, the insecure Jan, the day-dreaming Bobby, and the snooping Cindy. The family is joined with Alice, their housekeeper that makes self-depreciating jokes.

Sherwood Schwartz (previously of Gilligan's Island fame) developed and produced the series. He was shopping the show around to networks for a year or so before it was picked up to capitalize on the success of Yours Mine And Ours, a 1968 feature film about another large blended family. (This was obliquely acknowledged by the makers of A Very Brady Sequel when they selected one of the stars of Yours Mine And Ours, Tim Matheson, to play Carol Brady's long-lost first husband...sorta).

Never a huge hit in its initial network run on ABC, the show became inexplicably popular (perhaps through its Theme Tune, and the songs they did?) once it went to daily syndication in the late '70s, and a cultural icon (and eventual subject of vast quantities of nostalgia and derision in equal measure) for Gen-Xers. Over the years, the show gained two made-for-TV reunion movies and a couple of spin-offs. Moreover, the actors of the children have appeared in specials and game-shows numerous times.

In the years since the show's cancellation, various tidbits have come to light regarding the show and its cast: like its sister series Gilligan's Island, the concept grated on several of the cast members (several actors were busy most of the time sending angry memos to the producers about the horrible scripts they had to work with). Also, there were behind-the-scenes romance stories between almost every member of the cast. Oh, and Tiger (the dog) was actually two dogs; the 'original' Tiger wandered off the set one day looking for a place to 'do his business' and was promptly hit by a truck.

For the 1990s version, see Step by Step. The manga Little House With an Orange Roof has a very similar premise.

The show has had several continuations and spin-offs. Tropes can be found on these pages:

The Brady Bunch is the Trope Namer for:
Tropes used in The Brady Bunch include:
Retrieved from "https://allthetropes.org/w/index.php?title=The_Brady_Bunch&oldid=1928351"
Categories:
Cookies help us deliver our services. By using our services, you agree to our use of cookies.