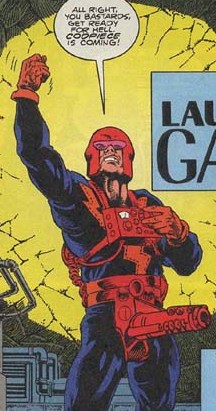 "Nothing can stop the power of Codpiece!"

Like building an Evil Tower of Ominousness or wielding a BFS or BFG, there are just some things that have to make other characters wonder if a male character must be compensating for certain other inadequacies.

Despite the joke, sometimes bigger really is better, in a non-Freudian way. In these cases, you're not Compensating for Something, you're sane. Usually.

Theorized by some to be the reason Heroes Prefer Swords.

If you actually have a small penis, it would, unfortunately, make you an Acceptable Hard Luck Target.

See also Gun in My Pocket.

The examples are limited to In-Universe. Please do not add your own speculations.

Examples of Compensating for Something include:

Retrieved from "https://allthetropes.org/w/index.php?title=Compensating_for_Something&oldid=1635741"
Categories:
Cookies help us deliver our services. By using our services, you agree to our use of cookies.