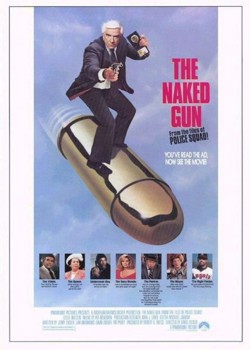 A film Spin-Off of Police Squad!, following Police Lt. Frank Drebin (Leslie Nielsen) as he continues to get into trouble. The films serve as parodies of the cop genre, and let nothing, including the blatant warping of reality and breaks in the fourth wall, get in the way of a good gag. The genius of the Drebin character is that Nielsen plays him almost totally straight: he's a buffoon, but he acts like a completely serious film detective even as lunacy explodes all around him, almost as if he's wandered in from a different movie.

Features slapstick, Visual Puns and Shout-Outs by the bucketful. At three movies, this actually lasted longer than the TV series it was based on. In all three Frank's love interest is Jane Spencer (Priscilla Presley).

A fourth movie, to have been titled Naked Gun 4: The Rhythm of Evil was in pre-production, but appears to have been scrapped due to the death of Leslie Nielsen on November 28, 2010.

Tropes used in The Naked Gun include:
Retrieved from "https://allthetropes.org/w/index.php?title=The_Naked_Gun&oldid=1840176"
Categories: