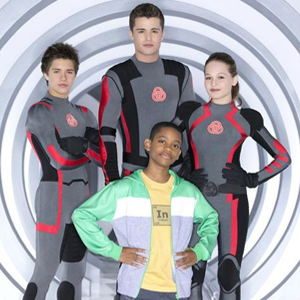 Clockwise from the top: Adam, Bree, Leo, and Chase

Lab Rats is a Science Fiction Kid Com that airs on Disney XD.

When 14 year old Leo (Tyrel Jackson Williams) moves into his new step dad, Donald Davenport's (Hal Sparks), mansion, he snoops around and discovers Adam (Spencer Boldman), Bree (Kelli Berglund), and Chase (Billy Unger) -- three bionic siblings (each equipped with hi-tech apps) living in a lab beneath the house. An unlikely friendship develops as he sneaks them out to school for their first taste of freedom while they help him to become the most popular kid in school. But when their bionic glitches go off, things get chaotic very quickly!

Tropes used in Lab Rats include:
Retrieved from "https://allthetropes.org/w/index.php?title=Lab_Rats&oldid=1836892"
Categories: