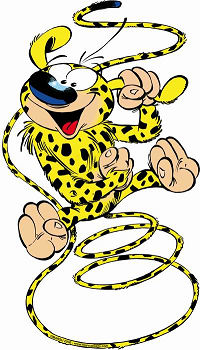 The marsupilami is a fictional animal species starring in two Belgian comic book series that got adapted twice into an animated series. Marsupilamis are monkeylike, black-spotted yellow creatures with an insanely long prehensile tail, from the Banana Republic of Palombia.

Marsupilamis were created by André Franquin for the Spirou and Fantasio album Spirou et les héritiers (Spirou and the Heirs) in 1956. Capturing one of these elusive and fictional critters was the goal of one the trials the titular heirs were tasked to do to receive their inheritance. The captured marsupilami (nicknamed "the Marsupilami") became a Team Pet for the duration of Franquin's run, serving as Comic Relief, Big Guy and Deus Ex Machina, thanks to his ever expanding list of anatomical peculiarities. When Franquin left the series, he kept the rights to the species, and the appearances of the Marsupilami dwindled in his birth series, before finally stopping in 1970. He remains one of the most popular characters of the series.

In 1987, Franquin decided to create his own publishing company, Marsu Production, and launched a Spin-Off comic about a family of marsupilamis, unrelated to Spirou's pet. They too started in Spirou and Fantasio, being the subject of a documentary within the series in the album Le nid des marsupilamis (The Marsupilamis' Nest). Mainly drawn by Franquin's assistant, Batem (Luc Collin), the series counts 22 albums in 2009 and is geared toward a younger readership than Spirou and Fantasio.

In 1992, a first Animated Adaptation was launched. Produced by Disney, it only lasted a season and had little in common with the original, beside the name and the general appearance of the hero. The titular Marsupilami could talk and was a laid-back smartass rather than a volatile Papa Wolf. All of the supporting cast was original. He was accompanied by his buddy, a big ape named Maurice, and met a lot of African animals.

A second cartoon was created in 2000 by a French production company. Much closer to the original than the Disney one in the first season, it was rechristened My Friend Marsupilami for the second season and centred upon a French human family that came to live in the middle of the Amazonian forest to study the marsupilamis.

And yes, that's two characters, one comic, two cartoons and a publishing house all named Marsupilami. First aired on CBS in the USA and CityTV in Canada.

Tropes used in Marsupilami include:
Retrieved from "https://allthetropes.org/w/index.php?title=Marsupilami&oldid=1898109"
Categories:
Cookies help us deliver our services. By using our services, you agree to our use of cookies.