Why Do You Keep Changing Jobs? 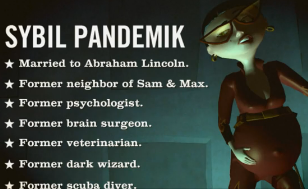 This is a Recurring Character that exists to fill in random jobs at any variety of businesses the main characters visit. And we mean any variety, no setup or explanation necessary.

May overlap with Honest John's Dealership. Compare Inexplicably Identical Individuals and Recurring Extra, which is a less specific and less likely to be plot relevant version, and The Generic Guy where the character has little relevance to the plot at all. Also compare when a person has a steady job (for now, at least) but who seems to have had insane amounts of former jobs which pertain everything to plumbing for royalty to fighting to unusual research projects.

Examples of Why Do You Keep Changing Jobs? include:

Retrieved from "https://allthetropes.org/w/index.php?title=Why_Do_You_Keep_Changing_Jobs%3F&oldid=1890474"
Categories:
Cookies help us deliver our services. By using our services, you agree to our use of cookies.