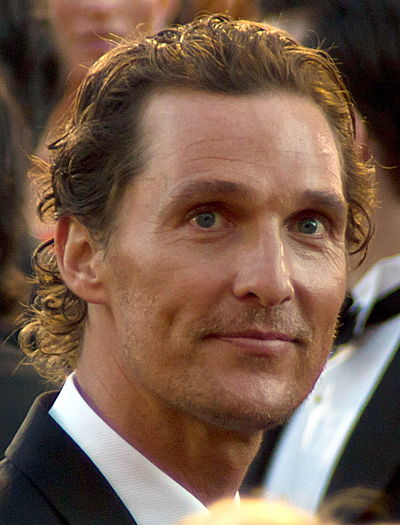 Matthew McConaughey in 2011, at the 83rd Academy Awards.

Matthew David McConaughey (born November 4, 1969) is an American actor. He first gained notice for his breakout role in the coming of age comedy Dazed and Confused (1993), and went on to appear in films such as the slasher Texas Chainsaw Massacre: The Next Generation (1994), the legal thriller A Time to Kill (1996), Steven Spielberg's historical drama Amistad (1997), the science fiction drama Contact (1997), the comedy EDtv (1999) and the war film U-571 (2000).

McConaughey achieved further success in 2013 for portraying a cowboy diagnosed with AIDS in the biographical film Dallas Buyers Club, which earned him the Academy Award for Best Actor and Golden Globe Award for Best Actor – Drama, among other awards and nominations. He also starred as Rustin Cohle in the acclaimed 2014 HBO crime anthology series True Detective. In April 2014, Time magazine included McConaughey in its annual TIME 100 as one of the "Most Influential People in the World."

Matthew McConaughey has performed in the following roles:
Retrieved from "https://allthetropes.org/w/index.php?title=Matthew_McConaughey&oldid=1983053"
Categories:
Cookies help us deliver our services. By using our services, you agree to our use of cookies.