Everything About Fiction You Never Wanted to Know.
Jump to navigation Jump to search
/wiki/Gregory Peckcreator 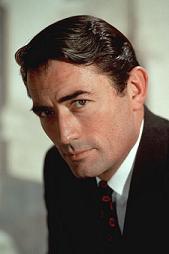 A clean-cut, all-American actor with a stirring voice and a sincere squint, Gregory Peck mostly made a career of playing incorruptible pillars of virtue and wisdom. Best known for his Oscar-winning turn as Atticus Finch in To Kill a Mockingbird (voted by the American Film Institute as the greatest hero in the history of American film), he played similarly admirable characters in films such as The Yearling, Gentleman's Agreement, Twelve O'Clock High, Other People's Money and The Big Country. The Gregory Peck Law goes like this:

The frequency with which a character threatens Gregory Peck and his family is inversely proportional with their chances of surviving the movie.

He also liked to occasionally play way against type, with roles such as bigoted rapist Lewt in Duel in the Sun, or Josef Mengele in The Boys from Brazil. In real life, he had a reputation as a gentleman and was a classical Nice Guy - which is a key reason he enjoyed playing Atticus Finch so much.

His grandson, Ethan Peck, has a reoccurring role on Gossip Girl.

Gregory Peck has performed in the following roles:
Retrieved from "https://allthetropes.org/w/index.php?title=Gregory_Peck&oldid=1849236"
Categories:
Cookies help us deliver our services. By using our services, you agree to our use of cookies.