Everything About Fiction You Never Wanted to Know.
Jump to navigation Jump to search
/wiki/Bing Crosbycreator 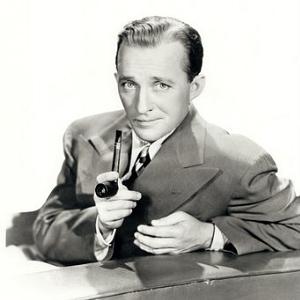 "Everyone knows I'm just a big, good-natured slob."
—Crosby, on himself.

"He was an average guy who could carry a tune."
—Crosby's epitaph, written by himself.

Born May 3, 1903. Died October 14, 1977. Reputedly his last words were, "That was a great game of golf, fellas." A singer, actor, innovator, amateur golfer and businessman. Suffice to say, very few people agreed with his self-assessment of his singing skills.

Harry Lillis "Bing" Crosby started his career as a singer and made in big in the early 1930s with Decca Records. In 1942 he recorded what would become his most famous legacy: the Irving Berlin song "White Christmas". When it was released, it stayed at #1 on the charts for over 11 weeks. It has remained a perennial Christmas favorite in the United States. In fact, Crosby did several Christmas albums, which is how the younger generation is familiar with him.

Crosby appeared in almost 80 different films over six decades. As a box-office draw, he was surpassed only by Clark Gable and John Wayne. He won an Academy Award for Going My Way. His most famous films include the Road To... series filmed with Bob Hope, and of course, White Christmas.

Crosby pioneered pre-recorded radio shows, and was an astute businessman. He sponsored the development of the videotape and invested in a little company called Minute Maid. At one time he was part owner of the Pittsburgh Pirates.

Crosby popularized golf and sponsored several early tournaments. He also competed in both the British and American Pro-Amateur Tournaments.

Not to be confused with Bob Crosby, his youngest brother and a talented singer in his own right.