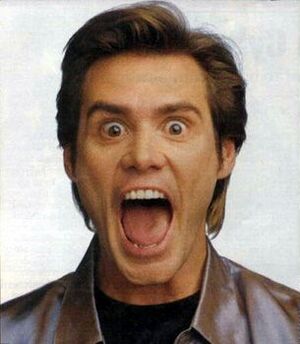 Jim Carrey is a colorful actor with a face for molding, and often plays the central or main character in a show. He had been acting since the mid-1980s, most notably in the short-lived sitcom The Duck Factory, but came to attention as a Token White cast member on In Living Color who managed to hold his own with several popular sketch characters, most famously Fire Marshall Bill.

When the small-scale Ace Ventura - Pet Detective arrived on movie screens in early 1994, it was roasted by critics but proved to be a surprisingly big hit. As it happened, he did two other films that year (The Mask and Dumb and Dumber) and was soon an A-list performer, in essence the first big film comedy star of the 1990s. He has played many classic characters, and his involvement in a movie will often be a success - so successful, the subsequent films and series usually don't do as well because he is not in it. This is because after Ace Ventura: When Nature Calls was such a huge flop in comparison to the original, he pledged never to do a sequel again.

Starting with The Truman Show, he has successfully made the transition to more serious films, with Eternal Sunshine of the Spotless Mind probably his most lauded serious role. It hasn't stopped him from appearing in goofy comedy as well, though, and nowadays he's well respected both aspects of his acting range. While not as popular as he was at his height in The Nineties, his career has proven surprisingly durable.

In his early days performing stand-up comedy, Carrey reportedly wrote himself a check for almost $1,000,000 and promised himself that he would, one day, be able to cash it. That promise was fulfilled soon after his performance in The Mask and Dumb and Dumber, though by that point, he had already earned several orders of magnitude more than the check itself was worth.

Jim Carrey has performed in the following roles:
Jim Carrey provides examples of the following tropes:
Retrieved from "https://allthetropes.org/w/index.php?title=Jim_Carrey&oldid=1908414"
Categories:
Cookies help us deliver our services. By using our services, you agree to our use of cookies.