Everything About Fiction You Never Wanted to Know.
Jump to navigation Jump to search
/wiki/Al Pacinocreator 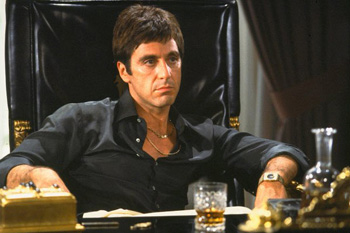 Al Pacino is one of the greatest actors in American film history. Despite a difficult childhood in an impoverished neighborhood, he pursued his dream of becoming an actor and was almost instantly recognized as a natural. After taking roles of varying prominence in several on- and off-Broadway plays, he caught the eye of Francis Ford Coppola while on the set of The Panic At Needle Park. Coppola fought tooth and nail to get Pacino in the role of Michael Corleone; competitors for the role included Robert De Niro, Jack Nicholson, and Dustin Hoffman. Al Pacino was successful, and the rest is history.

He often stars in gangster and cop films and is compared to Robert De Niro. He also maintains his Broadway career, though most aren't aware of it. Pacino's memorable roles are Michael Corleone, Sonny Wortzik, and Tony Montana. His performance as Michael Corleone, particularly in the sequel, is legendary and considered one of the greatest film performances ever.

He was nominated seven different times for an Academy Award, but he finally won for his role as Lieutenant Colonel Frank Slade in Scent Of A Woman.

Al Pacino has performed in the following roles:
Retrieved from "https://allthetropes.org/w/index.php?title=Al_Pacino&oldid=1849216"
Categories: