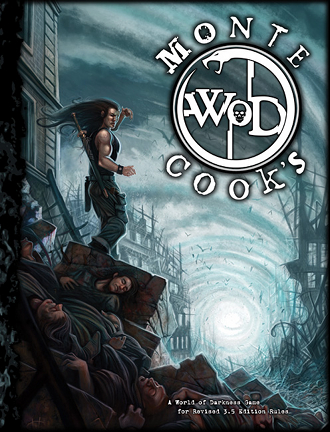 The end of the world? Happy Easter Egg hunt! No, it's just the beginning.

Monte Cook's World of Darkness is a 2007 Tabletop RPG set in a world much like our own, albeit with one not-so-small difference. Thanks to the intrusion of an Eldritch Abomination, the fabric of reality has been weakened. However, the intrusion was (mostly) halted thanks to the collective resistance of a few thousand minds. In the wake of this initial failure, the entity has created various brands of horrors, monsters, and supernatural phenomena around the world. This Cozy Catastrophe is nonetheless subject to a Masquerade as the world is only dimly aware of the true nature and repercussions of the event that devastated a large chunk of the US. In this world, shadows run deeper, mysteries exist in every corner, and humanity is not quite the master of the world or its fate.

Humans share the Earth with various supernatural creepy crawlies that prey on them like cattle, use them as pawns, and kill them when convenient (or at whim). In an interesting tightrope walk, individual humans have little power, but the minds of those who resisted the intrusion gained various powers that they use to fight the influence of the entity and its unwitting and willing servants.

Much like the Old World of Darkness and the New World of Darkness, in this setting there are several supernatural creatures, albeit here they all share the same Mass Super-Empowering Event and have a shared cosmology rather than the sometimes conflicting backgrounds and Fantasy Kitchen Sink of the two former settings. Being based on the D20 System, it allows for a good deal of customization with other supplements and materials outside the World of Darkness. This conversion of White Wolf's Point Build System into a Class and Level System also allows a way of porting some WoD concepts and mechanics into other games.

Tropes used in Monte Cook's World of Darkness include:
Retrieved from "https://allthetropes.org/w/index.php?title=Monte_Cook%27s_World_of_Darkness&oldid=1757409"
Categories: