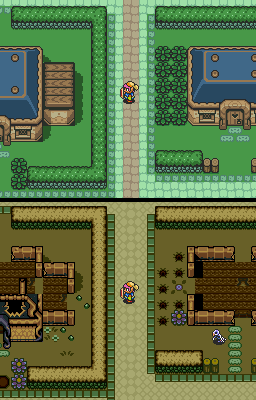 A decayed shadow of the light world.

Drive down the old highway at midnight, walk through an ancient shrine to the Elder Gods, or "sleep off" a bad trip from a strange drug that's darker than oil... and you'll end up in a parallel world made of your worst nightmares. This is the Dark World.

It is a twisted fun-house mirror version of our world, filled with the distorted reflections of normal buildings, decayed into Sinister Subways and Abandoned Hospitals. The changes can even extend to the layout of the city or area, the geography will turn malevolent as it gets huge gaping holes, fences, or other barriers added—or removed. The dimensions don't have to add up the way you learned in geometry class.

Its inhabitants will likely be similarly warped, if not monsters outright or unfathomable spirits. If the real world is also populated with monsters, expect the former to be tougher. Perhaps they feel at home in the dark? It's not always literally darker, but often is. It might not necessarily be evil, but often is. The nature of the Dark World might never be revealed, but could very well be entirely "natural", or outright hellish.

Entering the Dark World can be distressingly easy: drive to a little old town, walk into a Haunted Castle, activate a strange device, Swirly Energy Thingy, crawl through a hole in your bathroom or go into a Convenient Coma near a psychically charged place. The last one tends to be freakiest because whatever Nightmare Fuel the darkness throws at you will most likely be reinforced by your own mind. Returning to the "real" world is always harder; even if you have control over your transitions between the worlds, your objective will often be in the more dangerous one - and even if you walk away, the Darkness might just follow you home...

A Dark World is a type of Alternate World Map, if used as a World Map.

A Sub-Trope of Shadowland.

Examples of Dark World include:

Retrieved from "https://allthetropes.org/w/index.php?title=Dark_World&oldid=1494016"
Categories:
Cookies help us deliver our services. By using our services, you agree to our use of cookies.