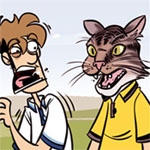 Apparently, a cat is not fine, either.

A character is transformed into an animal, either completely or partially (like a Biological Mashup). The defining quality for this trope is whether their transformation was Voluntary Shapeshifting or not:

The transformation itself may be scientific in origin, or mystical. Popular mystical transformations include Werewolves and other Werebeasts, wolves (who may be confused for werewolves), or such chestnuts as a witch turning people into toads. And who can forget such classic fairy tales such as swan maidens or The Frog Prince? In fact, Animorphism is Older Than Feudalism, with The Odyssey describing Circe turning Odysseus' sailors into pigs.

See also Baleful Polymorph, from witch this is the consequence. Contrast with Humanity Ensues, the rarer inverse of animals transforming into humans.

Not to be confused with the Sliding Scale of Anthropomorphism. See also Petting Zoo People.

Not to be confused with anamorphism, either kind.

Retrieved from "https://allthetropes.org/w/index.php?title=Animorphism&oldid=1846869"
Categories:
Cookies help us deliver our services. By using our services, you agree to our use of cookies.