Our Werewolves Are Different 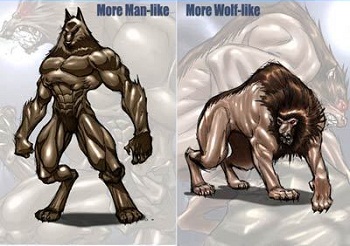 How much wolf must a wolfman be for a wolfman to be wolf?

Sub-Trope of Our Werebeasts Are Different, dealing with variations of lycanthropy (i.e. werewolves). As with vampires, the exact parameters of lycanthrophy vary, but to meet the definition, a werewolf must be like an Animorphism who takes the form of a wolf every month. The prospective werewolf character has a number of options for customization. See the Werewolf Analysis Page for a listing of common characteristics and some variations on werewolves in media.

However, recently the werewolf's cachet has been rising. Recent works of note include the Wolves of Mercy Falls trilogy, Jennifer Lynn Barnes' Raised by Wolves (a sequel to which is in the works), and the Mercy Thompson and Kitty Norville books. 2010 also saw a highly-publicized remake of The Wolf Man, although this depiction is much more traditional then the above. And of course, they are very popular within the Furry Fandom, usually of the more-in-control-while-transformed variety, and their depictions therein can range from the innocent to outright Yiff.

The word "werewolf" is a compound with the archaic English word for an adult male (etymologically "man" was once genderless). Hence, the not-uncommon female Lycanthropes should more strictly be "wifwolves" (or 'woman-wolves'), a term that has not seen much actual use. Generally, werewolves are Older Than Feudalism, going back to the European middle ages- and to the Ancient Roman myth of a King cursed by Zeus to become one. Werewolves are very popular because of qualities of opposing forces of 'man vs animal nature'.

Examples of Our Werewolves Are Different include:

Retrieved from "https://allthetropes.org/w/index.php?title=Our_Werewolves_Are_Different&oldid=1886112"
Categories:
Cookies help us deliver our services. By using our services, you agree to our use of cookies.