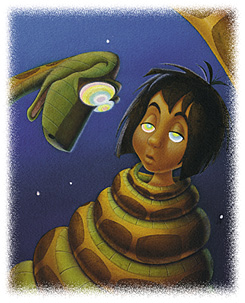 If the eyes are the windows to the soul, this person has a very... persuasive... compelling... even possessive soul. With little more than a few words intoned in their deep, Compelling Voice, any fool gazing into their eyes will be hopelessly hypnotized.

The mind control victim who has gazed too long into this abyss will likely develop Mind Control Eyes. High power Hypnotic Eyes (or when broadcast) may function like a Hypno Ray and work on several onlookers at once.

If the hypnotist is using glasses, then it's likely a Mind Control Device instead of this trope.

Examples of Hypnotic Eyes include: