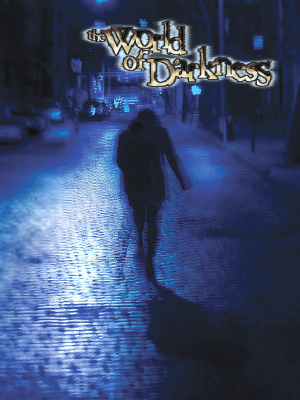 Our world when the sun goes down... and stays down..

Chronicles of Darkness, also known as the New World of Darkness, is a Tabletop RPG set in a world much like our own, albeit darker. Shadows run deeper, mysteries exist in every corner, and humanity is not quite the master of the world or its fate.

Humans share the Earth with various supernatural creepy crawlies that prey on them like cattle, use them as pawns, and kill them when convenient (or at whim). In an interesting tightrope walk, individual humans have little power; but a tenet of most of the supernatural groups is that humanity as a force is dangerous and must remain ignorant. There is a reason that whenever a Hunter dies, another rises elsewhere.

The New World of Darkness was created in the wake of Time Of Judgment, the gameline-spanning event which served as the promised cataclysmic close to Old World of Darkness. However, while it shares many tropes with the oWoD it is also quite different, since it was rebuilt taking into account many criticisms of its predecessor. Whether these changes were an Adaptation Distillation or "They Changed It, Now It Sucks" can be something of a Base Breaker.

As a revamping (no, not that kind of vamping) of the Old World of Darkness, some of the themes it keeps (albeit twists a bit) are the following. The World of Darkness, both old and new, are settings where several Supernatural Creatures exist. Each has a unique niche, theme, and Backstory. There are three core supernatural races (Vampires, Werewolves and Mages) and many supplemental ones (Changelings, Prometheans, Sin-Eaters) and humans who hunt them. The setting is a Crapsack World, albeit rather than overwhelming oppressive cataclysmic impotence and moral degradation, it focuses on hidden horrors, kitchen sink despair and moral degradation.

Among the biggest differences between the two is that the nWoD is highly modular. The very first "gameline" that came out was about bland and ordinary mortals. This book also served as the core rulebook, creating a unifying (though not always balanced) set of rules for all the following supplements to build on and adhere to. In contrast to the Old World, it lacks a unifying Crossover Cosmology and Metaplot, so the existence of the supernatural creatures from any other gameline is optional in your game—in fact, if you're playing a "Mortals" game, you could decide that none of the classics exist. The Story Teller can craft his or her own cosmology wholesale from the various toolkits given. Because of this, some see the new setting as a Retcon of the old, to fix mistakes and imbalances; while no wholesale plot is lifted, several themes, clans, institutions and other things are ported over. Your Mileage May Vary about that, as many key themes and features of the old games were lost. In the case of Changeling, the new game is entirely different from the old. The new games are also much more mutually compatible rules-wise, which is important for those who want balanced and easily manageable crossovers.

It also leaves more room for homebrew expansions and games, though most of them aren't really worth the trouble. The ones listed here are decent, detailed and balanced enough to be worth consideration. Although particularly featherbrained homebrews may be worth noting.

In 2007, a spin-off, Monte Cook's World of Darkness, was published using the D20 Modern rules.

In 2010, White Wolf announed that it would be moving away from traditional print in favor of focusing on print-on-demand services and publishing to PDFs. While the outcry was expected, the nWoD has continued on with a new game-line planned for a late 2012 release.

Tropes used in New World of Darkness include: