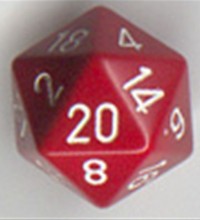 The roleplaying and strategy games that one sees on computers and video game consoles are one permutation of a much older legacy. The originals were played with a book of rules, pencils, paper, dice, models and imagination - a form of low-tech virtual reality. These are still popular today, in many forms, the most widely known of which are tabletop RPGs and tabletop wargames.

The default format for a tabletop RPG is for one player to be selected as the Game Master while the others each create Player Characters who will collectively act as the heroes of the game's plot. Individual sessions or "episodes" of the game are commonly called "adventures", and the ongoing game story itself is usually called a "campaign," a holdover from these games' own heritage from tabletop wargames.

These tabletop RPGs get a lot of flak from society -- usually due to misinformation or simply misunderstanding. Common myths include: that roleplaying games lead to devil worship, that players (and not their fictional characters) carry out magical spells, and that players actually become their characters.[1]

Another subset of the tabletop games category is the tabletop wargame, of which the most common format is an area set up as a battlefield (which may have a background map or miniatures to represent terrain) on which counters or miniatures are placed representing combat units. Players take the role of generals and attempt to defeat their opponents. The game may have a Game Master, or may rely solely on clearly defined rules. Historical and fantasy settings are most popular, the best known fantasy games probably being Games Workshop's internationally successful Warhammer Fantasy Battle and its sci-fi counterpart Warhammer 40,000. Chess could be defined as a simple form of wargame. Tabletops games are Older Than Radio with Kriegsspiel ("wargame") being created in 1812 by Prussian Leutnant Georg Leopold von Reiswitz and used by Prussian officers for training. Reportedly the Kaiser and his Generals spent many long nights playing the game conducting exercises. HG Wells was also a fan, and wrote several books ("Little Wars" and its sequel "Floor Games") on the subject that have become iconic.

Yet another subset is the live-action role-playing game (or LARP). LARPs are similar to Tabletop RPGs in how they play, but instead of sitting around the table, players actually act out the story physically. Since these situations don't lend themselves very well to long stat sheets or rolling dice, most LARPs use greatly simplified game mechanics, ranging from the "paper-rock-scissors" system used under White Wolf's first-edition Mind's Eye Theatre rules to semi-contact boffer-weapon systems clearly influenced by the Society for Creative Anachronism and other recreationist groups. These games vary greatly in size, from intimate affairs similar to traditional RPGs, to massive events such as those run by the International Fantasy Gaming Society or Mythodea.

Another popular type of tabletop game is the card game. Played with cards, Card games come in two flavors, collectible/trading and dedicated deck, though the rules vary greatly from game to game. Trading card games are generally the ones most often associated with other types of tabletop games. Notable trading card games include Magic: The Gathering and the Yu-Gi-Oh! Trading Card Game.

An unfortunate flaw of Tabletop games, as well as multiplayer games in general is how dependent they are on other players. You can have an indefinite playing time with multiplayer games (And these games are no exception to this rule) but unfortunately, these games are very dependent on other players. In the age of the internet, it's not uncommon to find a bunch of people who want to play a Tabletop Game but the local group(s) are either nonexistent, "Stop Having Fun!" Guys, crazy Scrubs, or so tight-knit they don't allow newcomers in. However; several games have benefited from the internet quite a lot because it allowed people from across the world to form a group. There exist programs, third-party or not, to play a tabletop game such as Dungeons & Dragons online; and sometimes there are direct adaptations of a tabletop game/online versions to play online. While these are not the perfect solution to the standard multiplayer game dilemma, this is one thing that shows that the internet was not just for porn!

This category has the following 16 subcategories, out of 16 total.

Retrieved from "https://allthetropes.org/w/index.php?title=Category:Tabletop_Games&oldid=1565943"
Categories:
Cookies help us deliver our services. By using our services, you agree to our use of cookies.