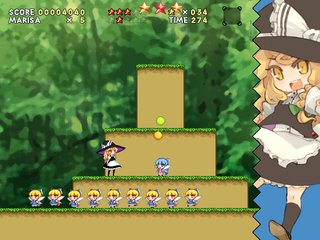 Marisa should have brought a Fuzzy. Or the Reimu Suit.

New Super Marisa Land is a 2010 platform game by Twilight Frontier, creators of Super Marisa Land and Mega Mari. In this hybrid of Touhou and Super Mario World, you play as Marisa, who has her mushroom collection stolen by the Three Mischievous Fairies. She must track them down all throughout Gensokyo, coming across various members of the Touhou cast, and beating the tar out of them.