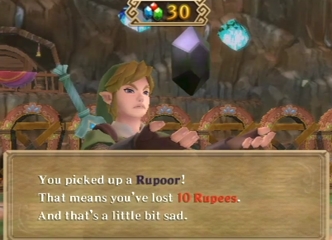 "Damn, now I can't make the payment on my horse."

An item which harms the player who picks it up or uses it instead of helping them. Differs from Power-Up Letdown in that the harm it causes is direct and intentional, rather than from a design flaw.

So, if it's harmful, why would anyone pick it up or use it? Players don't mean to, but poison mushrooms have three main ways of getting around that:

Whatever their method, it's a Power-Up that powers you down instead. Contrast with Chest Monster, which is a monster that disguises itself as a Power-Up or other item, and Power-Up Letdown, which is a Power-Up with positive effects, just not positive enough to be useful.

Not to be confused with a very large mushroom that is even more deadly.

Examples of Poison Mushroom include:

Retrieved from "https://allthetropes.org/w/index.php?title=Poison_Mushroom&oldid=1835126"
Categories:
Cookies help us deliver our services. By using our services, you agree to our use of cookies.